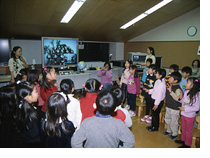 At Tamagawa, Center for University International Programs and Center for K-12 International Exchange were established to enable the smoother and more consistent operation of these international education and exchange programs. The University is committed to encourage its students to develop a broad perspective and a belief that "The Earth is our home."