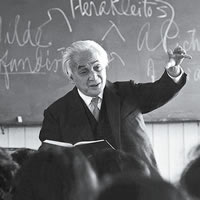 Kuniyoshi Obara, the founder of Tamagawa, played an important role in the free education movement of the Taisho period and was widely recognized from before the founding of Tamagawa as an educator of the modern age. He then dedicated himself to building a new campus that would be based on his own ideal of "Zenjin" Education, and founded Tamagawa in April 1929. In those early days, after school, all the teachers and students would change into their working clothes and work together under Obara's direction to cultivate and clear the land for the campus. A number of innovative educational ventures such as international exchange programs based on his belief that "We are all citizens of a global village" and the publication of the first Children's Encyclopedia in Japan followed, one after the other. In line with the new post-war system of education, by 1950 Obara had set up a comprehensive campus spanning kindergarten, elementary division, lower and upper secondary division and university. Thereafter, leading to the mid-1950s, pride was taken in the solid record of the distinct Tamagawa educational method following the development of activity-based education and the research and implementation of moral education.