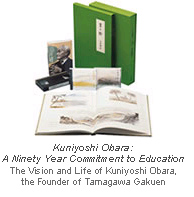 Tamagawa University Press got its start in 1929 when Tamagawa was founded, with "Idea Shoin" founded in 1923 as its predecessor. It has published works for readers across a broad array of age groups, from children's books to university texts and technical books.

Tamagawa University Press is the only university press in Japan that has published numerous books related to elementary education, including books on children's plays and song books. The University Press has published primarily books for children and higher education, reflecting the pride it has in its tradition of many years of publication related to education practice and theory, in addition to editing eight types of encyclopedia, including the "Children's Encyclopedia" (30 volumes), which was Japan's first encyclopedia for elementary school children, and the "Tamagawa Encyclopedia" (31 volumes) for adults. In addition to these publications, the University Press has also published books for the general public and has edited "Zenjin" (monthly), a periodical of Tamagawa Gakuen featuring interviews and reports on educational practices at Tamagawa Academy and University.