English as a lingua franca program at Tamagawa University

Center for English as a Lingua Franca web site 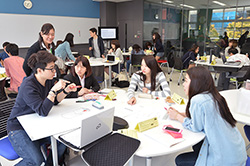 In the past few years, Tamagawa University has been working hard to reorganize its English language program to meet the needs of the globalized world. Instead of having each college organize its English language program, we began to build a campus wide program. After a year of a pilot EFL (English as a Foreign Language) program involving first year students of College of Business Administration and the Department of Comparative Cultures, College of Humanities in 2012, we launched our new ELF (English as a Lingua Franca) program on April 1st, 2013. Currently, each semester, over 2,000 students from all the Colleges are participating in the ELF program.

The program is designed for our students to become able to communicate with people all over the world using English as a global lingua franca, depending on the levels and specialties required for their majors. In addition, the students are expected to have become familiar with language learning strategies by the end of the program, so that they can apply these strategies to learning additional languages.

The courses are conducted mainly in English. Considering the fact that the vast majority of English users are bi-/multilingual, and that there are by definition no native speakers of a lingua franca (e.g. Jenkins, Baker & Dewey 2018)*, our ELF courses are taught by instructors with diverse first languages including English and Japanese, from Asia, Australasia, Americas, and Europe. In this way, our students will be exposed to a multilingual reality with English by the time they complete the program. Consequently, we hire our ELF teachers not based on whether s/he is a so-called native English speaker or not, but on his/her academic credentials, experience in teaching English to speakers of other languages, and intercultural backgrounds.